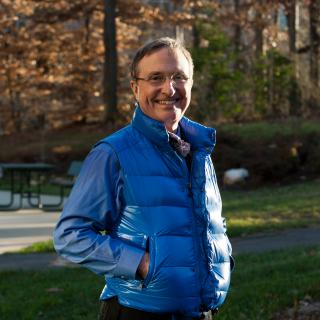 Thomas E. Lovejoy was elected University Professor at George Mason in March 2010. He previously held the Biodiversity Chair at the Heinz Center for Science, Economics and the Environment and was President from 2002-2008. An ecologist who has worked in the Brazilian Amazon since 1965, he works on the interface of science and environmental policy. Starting in the 1970’s he helped bring attention to the issue of tropical deforestation and in 1980 published the first estimate of global extinction rates (in the Global 2000 Report to the President). He conceived the idea for the long term study on forest fragmentation in the Amazon (started in 1978) which is the largest experiment in landscape ecology, the Minimum Critical Size of Ecosystems project (also known as the Biological Dynamics of Forest Fragments Project). He also coined the term “Biological diversity”, originated the concept of debt-for-nature swaps and has worked on the interaction between climate change and biodiversity for more than 30 years. He is the founder of the public television series “Nature”. In the past, he served as the Senior Advisor to the President of the United Nations Foundation, as the Chief Biodiversity Advisor to the World Bank as well as Lead Specialist for the Environment for the Latin American region, as the Assistant Secretary for Environmental and External Affairs for the Smithsonian Institution, and as Executive Vice President of World Wildlife Fund-US. In 2002, he was awarded the Tyler Prize, and in 2009 he was the winner of BBVA Foundation Frontiers of Knowledge Award in the Ecology and Conservation Biology Category. In 2012 he received the Blue Planet Prize. He has served on advisory councils in the Reagan, George H.W. Bush, and Clinton administrations. In 2009 he was appointed Conservation Fellow by the National Geographic Society. He chaired the Scientific and Technical Panel for the Global Environment Facility which provides funding related to the international environmental conventions from 2009-2013 and serves as Advisor to the current Chair.  He received his B.S. and Ph.D. (Biology) from Yale University.

The Challenge of Biodiversity - This course is intended to give students the necessary background to pursue advanced studies and careers that involve both international and domestic issues in conservation and conservation biology.

The principal objective is to enrich students' understanding of solving problems in conservation and conservation biology.