Story and images by Adam Garrity

Ambystoma salamanders are commonly referred to as mole salamanders because they live most of their lives under leaf litter or fallen trees in dense forested areas or they live in underground burrows. Adults come out of the dense forest to breed once a year in a vernal pool – a body of water that dries up before summer is over. The salamanders lay large egg masses with 1-250 eggs in one single egg mass. The juvenile salamanders are fully aquatic and grow until they are large enough to walk out of the water and live a fully terrestrial life.

The study was made possible through an internship from the Clifton Institute in Warrenton, Virginia. In this study, I visited three vernal pools in three different environments. The three environments were dense forest, forest edge, and open field. The purpose of this study was to understand and attempt to gauge which environment is most suitable for juvenile salamander to grow and mature in. According to multiple studies when juveniles are in their gelatin egg mass, it is known that they mature faster in warmer waters.

At each location, minnow traps like the one shown shows how the salamanders were able to swim into the one end but were unable to swim back out the same hole they entered. Each trap had a hole at the bottom to allow water flow as well as a rope attached to the bottle to ensure the bottle wouldn’t move and there would be room in the trap for oxygen for any fauna that may enter the trap and need air. The ropes were then tied to stakes along the edges of the vernal pools. The traps would be checked within 24 hours to ensure the salamander didn’t spend too much time in a confined area. At each visit to the vernal pools, air and water temperature were taken as well as length of the juvenile, snout vent length (SVL), any damages or injuries to the juvenile, and identification of species was attempted. Juvenile salamanders were also caught by hand on 2 occasions. This was done using a large bucket and simply dipping it into the water in the area the juvenile were laying. They were sucked up by the water entering the bucket and from there observed by extracting juvenile using a small aquatic net so as not to damage any limbs or gills. The bucket was cleaned between each visit to the three vernal pools to ensure no cross contamination between different vernal pools. One vernal pool may be exposed to a certain bacterium that might not be present in another vernal pool which could endanger organisms in the non-infected vernal pool. 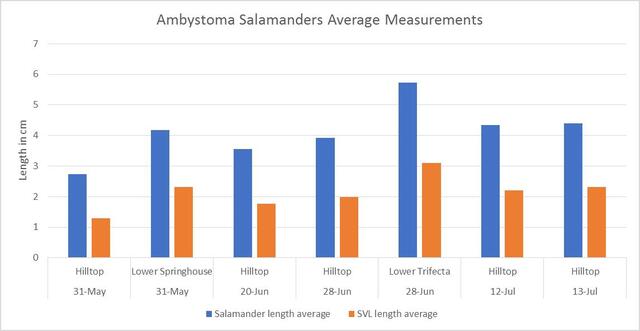 The vernal pool located in the forest edge environment had the largest juvenile caught with a 3.5 SVL and a total length of 6.5. Juveniles have also been observed floating in the middle of the pool. The results are shown in Table 1 which shows the averages of all the lengths and the SVL of each visit to each pool. In some of the visits, some traps caught 1 or no salamanders and those trips were not averaged. The table also shows the temperatures of the water at each location and the quantity of larvae caught at each vernal pool. These results indicate what was mentioned previously in that the forested areas are the best for larvae growth. However, they do not indicate why there was a lack of larvae caught in the open field environment. The open field vernal pool is exposed to more predators as well as more extremes in the weather. The open field is also exposed to more direct solar radiation which would increase the temperature of the water.  It is known that warmer waters increase growth for larvae salamanders and this could indicate that the juvenile salamanders had matured quicker than those in the forested areas.

More extensive test should be conducted to more accurately measure the growth of larvae in different environments. These tests should also try to measure the rate of predation with the use of camera traps or pitfall traps to examine what is entering and leaving the vernal pools. This would improve the accuracy of the study and would allow for more accurate data to be collected.