Story and images by Adam Grocholl

After taking several classes at Mason, I became interested in environmental policies in the United States. I decided to apply for an internship at the Senate Committee on Agriculture, Nutrition and Forestry in Washington, DC to have a well-rounded understanding on how certain laws can have a direct effect on citizens (particularly farmers) and the environment in the United States. Shortly after applying, I was hired on as a republican legislative intern for the fall.

The purpose of this committee is, quite simply, to support the agricultural industry. This can include providing crop insurance, passing legislation that oversees livestock and poultry, ensuring that environmental regulations will not negatively affect rural workers, and to determining how SNAP (Supplemental Nutrition Assistance Program) is to be managed.

My primary responsibility was to assist the Republican and non-designated staff and act as a desk assistant in the front office of this committee. However, I had other notable responsibilities, including attending briefings, researching various topics to be used by the committee members, and ensuring hearings were run smoothly.

I had the unique opportunity to be on this committee during the negations of the 2018 Farm Bill. The Farm Bill is a bill updated every 5 years that deals primarily with the agricultural industry. Such notable topics that the 2018 Farm Bill handles are conservation, food aid, livestock, crop insurance, and rural development, among other important food-related issues. The previous 2014 Farm Bill was set to expire by January 2019. Before I began interning, the Senate democrats and republicans had finalized and agreed upon their version of the Farm Bill, as had the House democrats and republicans. My internship involved the negotiation process between the House and Senate to come up with one complete Farm Bill to be sent to the president. It was interesting to be in the middle of this process and witness day-by-day how a bill becomes a law in the United States. This process is often quite slow, as details have to be worked out and refined. For this particular bill, careful attention was placed so that all parties and affected citizens could be at least partially satisfied with the result.

I also got the opportunity to attend a hearing on the nomination of three individuals for positions in the USDA. Scott Hutchins, nominated to the position of undersecretary of agriculture for research, education and economics, was of particular interest to me as he is an entomologist who supports responsible pesticide use. Prior to this hearing, I was assigned to read all of Hutchins’ scientific papers and presentations to determine if he is qualified for this position. I discovered that as a scientists, he encourages sound agricultural practices that do not greatly impact the environment through integrated pest management. During this hearing, Hutchins was asked questions directly about anthropogenic climate change and pesticide use and he was able to answer the questions that seemed to point to how he would lead the USDA with both the farmers and the ecosystems in mind. 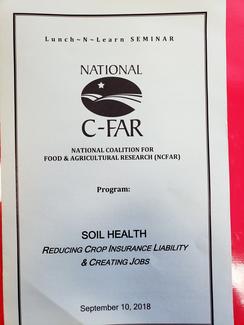 One of my favorite parts on this internship was the opportunity to attend briefings. These are presentations given by men and women from outside Congress that showcase their organization’s recently-released research on a specific topic. I attended several briefings throughout my time as an intern, including briefings on food waste, antibiotic resistant bacteria, soil health, the Paris Climate Agreement, and food assistance programs. The soil health briefing was especially interesting, as it was an environmental issue that directly affected the agricultural industry. It was interesting to learn that better agricultural practices (e.g. no tillage farming) decreased water use, increased crop yields, and saved the United States millions of dollars.

Another briefing I attended was on the Paris Climate Agreement. While I have learned much about climate change and this international agreement at George Mason University, I decided to look at this particular topic in different light. One man from the World Resources Institute mentioned that number of methane digesters on farms should be increased in order to reduce the reliance on fossil fuels. However, this man was unable to provide more in-depth details about how this proposal would work and affect American farmers. While this particular proposal may on paper be greatly beneficial to the environment, I have realized that it is imperative that all people affected are given opportunity to voice their concerns.

Overall, this internship has been a positive experience for my educational and professional development. Senators and staff all agreed in bipartisanship and doing what is best for American farmers. It was eye-opening to see a lack of division on both sides of the aisle and instead, genuine care for what others you may disagree with have to say. Through this internship, I have learned to look at policies, especially environmental-related, from a multi-faceted way. At least on the Senate Committee on Agriculture, the men and women are working hard to move things forward and desire to help their country remain prosperous. This internship has helped me desire to incorporate all parties in environmental policy discussions and analysis.