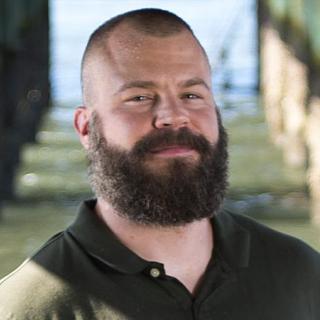 I study the ecology and physiology of human pathogens, specifically Vibrio vulnificus and V. parahaemolyticus.

Bacteria in the genus Vibrio are found naturally in coastal waters worldwide. The genus contains several species which are infectious to humans. Two of these species, V. vulnificus and V. parahaemolyticus have the rare ability to cause human infection by more than one route of entry, ingestion or through open wounds. Even a wound as small as an ant bite can allow these bacteria to cause necrotizing fasciitis, also known as flesh eating disease. These infections are potentially fatal, but even those patients that survive often have limbs amputated to stop the infection from progressing. Because these bacteria are ubiquitous in coastal and estuarine waters, they are also found in most seafood, making them an ingestion risk. They are of particular concern in shellfish, such as oysters, as these organisms concentrate the bacteria and are often eaten raw or only lightly cooked. Ingestion infections by Vibrio spp. can manifest as typical gastroenteritis, with symptoms such as vomiting, diarrhea, chills, or fever. These ingestion infections can quickly spread when the bacteria gain access to the blood stream. Blood pressure drops, organs begin shutting down, and large fluid-filled lesions appear on the extremities. Even with aggressive medical treatment, which includes IV-antibiotics and amputation of one or more limbs, over half of those infected will die within a few days. My research goal is to reduce the number of human infections caused by Vibrio spp. bacteria. To reach this goal requires achieving four objectives: 1) elucidate the biological features that enable the bacteria to cause human infections; 2) determine how this organism interacts with the shellfish host; and 3) understand the environmental factors, including effects of a changing climate, that increase infections by promoting greater pathogenic bacterial loads, and 4) developing applied technology to reduce infections. Research on these topics includes both field based environmental studies, and laboratory focused applied investigations.