The GGS Department is thrilled to announce and congratulate all our graduates and award winners from this past academic year! We are so proud of all your accomplishments and look forward to celebrating your continued achievements. 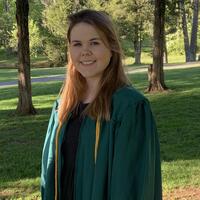 As a first-year student, Cailtyn Lightner was unsure what study of interest would meet her passions.  After completing a Human Geography course, she quickly knew that pursing the study of Geography would satisfy her curiosity of the interactions of the Earth.  Caitlyn's favorite aspect of the Geography field is how incredibly diverse it is.  Geography majors examine both the physical and human interactions of the world which promotes a well-rounded approach to the fundamental questions of the world.

What Caitlyn has enjoyed most at Mason is her time inside the classroom.  The time she has spent in the classrooms of GMU has been transformative.  Inside the classroom environment, it is easy to identify how passionate the professors are about the field of Geography.  These professors continue to challenge and encourage students to “think outside the box” and to approach the fundamental questions of the world through a geographer’s lens.  After graduation, Caitlyn will be continuing her graduate studies at Mason with a future goal of teaching at the university level. Reflecting on her time at George Mason, Caitlyn hopes to someday excite as well as encourage students to pursue the study of Geography as her professors have encouraged her. 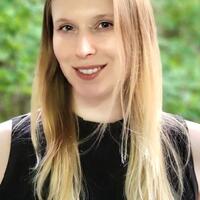 Lindsey Bornick found geography by accident while she was studying sociology at a community college. She fell in love with geography because it blended two of her interests: social science and physical science. Once she had taken all the geography classes they offered, Lindsey begin to search for a four-year college to major in geography. George Mason University was the perfect place to continue her education, so she transferred in the fall of 2019. Although her time on campus was short, Lindsey enjoyed it. The environment, students, and faculty made her experience outstanding. Her classes in the GGS department have inspired her to work hard and continue to learn. After Lindsey graduates in May, she will be proceeding with her search for cartography jobs in the area. 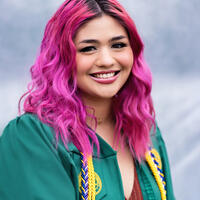 Cecelia O’Neill is a member of the Department of Geography and Geoinformatics (GGS) Class of 2021. After spending 5 semesters at the University of Delaware, Cecelia made the decision to leave Newark, DE and return to her hometown of Fairfax, VA in order to be closer to her family. After taking a semester off from college, she was accepted into and subsequently enrolled at George Mason University as an Undergraduate Transfer Student in Fall 2019.

During her time at George Mason University, Cecelia has served on the executive board of the GGS Department’s sponsored club Mason Mappers as Treasurer for 3 consecutive semesters, represented the GGS Department as a presenter at the 10th Annual College of Science Undergraduate Research Colloquium, and has made countless interpersonal and academic connections. She would like to personally thank her Undergraduate Academic Advisor, Dr. Nathan Burtch, as well as her Undergraduate Research Mentor, Dr. Taylor Anderson, for their support in her academic endeavors during her tenure at GMU. Following the conferral of her Bachelor of Science in Geography, Cecelia plans to attend the University of Mary Washington to pursue a Master of Education with a concentration in Elementary Education beginning in Fall 2021. She hopes to apply the knowledge that she has gained during her time as a Geography Student at George Mason University to help build inclusive, accessible, and comprehensive elementary science curriculums for future generations of aspiring scientists. 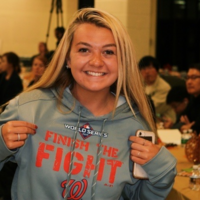 Emma Von Hoene is currently a rising senior pursuing a B.S. in Geography along with minors in Intelligence Analysis and Earth Science. Emma was also recently admitted into the accelerated masters program for Geoinformatics and Geospatial Intelligence. She always enjoyed science and knew she wanted to pursue a major in science, but was not sure which one to choose. Emma's father and mother both majored in Geography and her father actually studied it at Mason, so she decided to take a chance with it. After taking a few geography classes during her freshman year, Emma became very interested in the topic and felt included in the department. She got to know many students and professors, and was also offered many opportunities which helped her grow as a student and a person. After graduating with her bachelors and masters, Emma would like to continue research with GIS, the ocean, climate change and intelligence.  She would also like to eventually work towards a PhD. 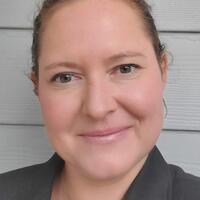 Mary Schwoerer chose Mason to study geography after hearing from numerous friends and coworkers that Mason's GGS department was highly respected throughout the community and somewhat of a hidden gem amongst its better known peers.  Her experience on the lovely campus and in her classes did not disappoint!  The presence of so many industry leaders and government agencies in the local area as well as cooperation with other departments for interdisciplinary research make this a really unique place to study and apply geographic science to a wide variety of topics. 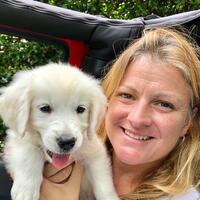 Carey Pollack is an Earth & Environmental Science teacher at George Mason High School in Falls Church. She has a B.S. in Geology from UNC-Chapel Hill, an M.A.Ed in Science Education from VA Tech, and now the M.S. GECA and GIS Graduate Certificate from GMU. She is from Great Falls, VA and has realized as an adult that she has always liked geography, at least subconsciously, because one of her earliest distinct memories is of making a relief map! She also loves orienting herself in new locations, way-finding, and studying all types of maps - all of which contribute to her notorious reputation for always knowing the 'better route' than the GPS.

What Carey has enjoyed most over her time in the GGS department is discovering and connecting with others who are as interested as she is in location and spatial information. She remembers clearly her first day of the program, after months of questioning if it was right for her, how at home she felt just by discussing map projections and learning the different definitions of GIS in GGS 553. Then, the challenges of each new course were made easier by working with people of common interests all along the way.

Carey plans to continue in secondary education for the foreseeable future, working to incorporate GIS into secondary classrooms and on the development of a one-of-a-kind Sustainability Academy in her district. However, she always misses being the student instead of the teacher whenever a program ends, so who knows what academic venture will come next. She has always had the dream of working with or for the National Geographic Society, as she loves the way they merge the wonders of exploration and science to tell the stories of the world (and make cool maps!). Carey is married to Jeff, and they have 5 kids, each of whom manage to listen patiently to her stories from 'school school' and 'work school'. She loves the beach, dogs, and games, when she is not formally teaching or learning. 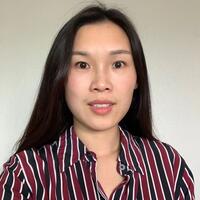 Yun Li received her bachelor's degree in software engineering and master’s degree in geographic information science from Wuhan University in 2009 and 2011. After working in one of the top technology companies in China for a couple of years, she started her doctoral program in the Department of Geography and Geoinformation Science (GGS) in 2015. Because of the mentorship of her supervisor Prof. Chaowei Yang and all the great faculty in the department, Yun now has the opportunity of conducting cutting-edge research. Without their guidance, she would never have been able to win this award. Yun's research mainly focuses on the Earth data discovery, high-performance computing, spatiotemporal data mining, and outreached to spatiotemporal analytics for environmental, climate, and health data. With approximately 30 peer-reviewed papers being published, her research contribution also won first place in the 2019 data science competition held by the research method and data science lab and second place in the 2020 AAG Robert Raskin student competition. Yun will continue to conduct research in Geoscience and contribute more to the community.