Singing in a silent spring: birds respond to a half-century soundscape reversion during the COVID-19 shutdown

Actions taken to control the COVID-19 pandemic have conspicuously reduced motor vehicle traffic, potentially alleviating auditory pressures on animals that rely on sound for survival and reproduction. David Luther, an ecologist and Assistant Professor of Biology at George Mason University and Elizabeth Derryberry, Associate Professor at the University of Tennessee, collaborated with a team of fellow ecologists from California Polytechnic State University, and the University of Tennessee to evaluate if and how songbirds might respond in the newly emptied acoustic space that results from fewer people on the road. 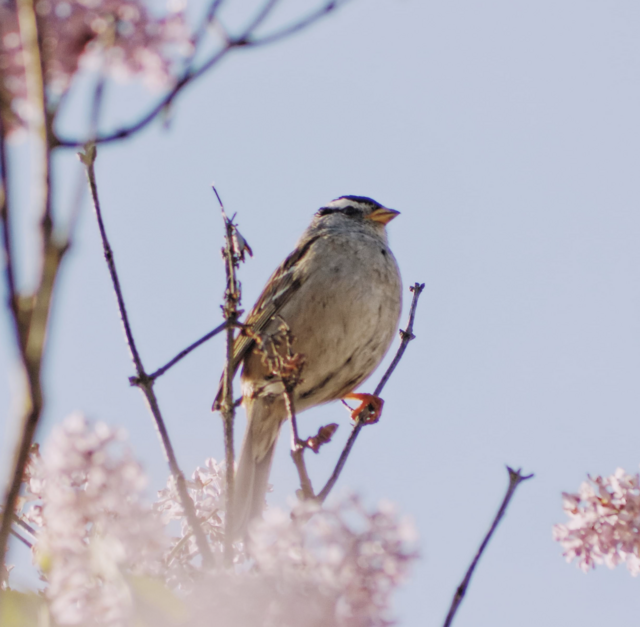 Their findings, recently published in Science, were based on a comparison of soundscapes and songs of the white-crowned sparrow across the San Francisco Bay Area prior to and during the recent statewide shutdown.

“When I saw photos of an empty Golden Gate Bridge, it struck me just how little traffic there was.” said Derryberry, lead author of the study. “I realized we were in a unique position to look at how changes in human behavior might affect wildlife and what the noise reduction might mean for the songbird we study.” Dewberry said.

Luther and Liz Derryberry had worked together since 2012 to study the effects of noise pollution on the sparrows. They reviewed noise and song samples obtained from both urban and rural sites surrounding the San Francisco Bay area and Richmond, California from April through June of 2016. The study then compared those samples with readings from Jennifer Phillips who captured noise and song samples in the same areas in April and May of 2020 for her postdoc work at California Polytechnic State University, San Luis Obispo.

In addition to Luther, Derryberry, and Phillips, the team also includes research scientist and data analyst, Graham Derryberry and Michael Blum, socioecology of disasters expert, both from the University of Tennessee.

During the shutdown, the team observed no difference in noise levels between San Francisco and Marin County; lower noise levels were likely due to less traffic. For example, traffic on the Golden Gate Bridge returned to levels not seen since 1954.

The dramatic reduction of human movement had erased a half-century of urban noise pollution. The researchers found that the birds responded by producing higher performance songs at lower amplitudes, effectively maximizing communication distance and salience.

According to Luther, prior to the shutdown, bird territories in San Francisco were nearly three times louder than in rural western Marin County but, during the shutdown, people could hear effectively four times more birds than usual.

“When the noise levels dropped, birds sang more softly.” Luther explained. “Even though they sang more softly, their songs travelled twice the distance because it was so much quieter.” He said.

This helps explain media reports suggesting that bird songs sounded louder during the shutdown and that people were more aware of the birds around them. Birds were actually singing more softly, but it was so quiet, they sounded louder. This also illustrates the serious impact of noise pollution on communication during normal conditions.

The paper also looks at performance songs and how birds adjust the quality of their song that is used for mate attraction and territorial defense, to accommodate for the local background noise conditions.