George Mason University astronomers are part of a global effort to search for planets orbiting AU Microscopii, a nearby star still surrounded by a disk of debris left over from its formation.

Last summer, using data from NASA’s Transiting Exoplanet Survey Satellite (TESS) and retired Spitzer Space Telescope, Mason physics and astronomy associate professor, Peter Plavchan, Bryson Cale, a Mason doctoral student, and their team reported the discovery of a system, known as AU Mic for short. The ‘out of this world discovery’ documented in their paper published in Nature, provides a one-of-a-kind laboratory for studying how planets and their atmospheres form, evolve and interact with their stars.

Now another global team has independently confirmed the system and measured its mass that was consistent with the initial discovery.

A team of astronomers using SPIRou, the spectropolarimeter / high-precision velocimeter at the Canada-France-Hawaii Telescope (CFHT), measured the mass and density of the close-in Neptune-like planet orbiting the hugely-active newborn star AU Microscopii (AU Mic), showing that this warm planet, named AU Mic b, orbits in the equatorial plane of its host. These observations mark the very first time the mass, density and orbital inclination of a planet so young are reliably characterized. This result is part of an international effort to unveil the properties of this newly discovered baby planetary system, spearheaded by astronomers at IRAP/CNRS[1], IAP/CNRS[2], IPAG/CNRS[3] and CFHT.

"It is incredibly exciting for the SPIRou team to independently recover the mass of AU Mic b with the Doppler method in the near-infrared, consistent with the discovery of this system earlier this year,” said Plavchan. “As the second closest young star to the Sun, AU Mic b and its young exoplanetary system will provide insights into the planet formation process for decades to come," Plavchan explained.

Astronomers used SPIRou to follow up the TESS/NASA discovery of AU Mic b by measuring mass, density, and orbital tilt of the planet therefore enhancing astronomers’ understanding of the object. SPIRou detected the minute gravitational pull induced by the close-in planet on its host star, AU Mic. The warm (~300°C) Neptune-like planet passes in front of its host star every 8.46 days. This transit causes the star’s light to dim as the planet moves across the disc of the star, enabling the planet’s detection by astronomers. Using Telescope like NASA’s TESS space telescope, observations of the planet indicated the radius is approximately 4x the size of the Earth. Using SPIRou spectra, the team measured the mass of AU Mic b to be approximately 17x the mass of Earth. Combining the TESS and SPIRou data, the team estimated the density of the planet and found it to be only slightly larger than that of water, ~4x lower the Earth’s density, and surprisingly similar to Neptune.

“Constraining these critical characteristics of AU Mic b are a testament to the capabilities of SPIRou," said Dr. Claire Moutou, co-author on the paper and former SPIRou instrument scientist at CFHT. “The observations of AU Mic b are incredibly exciting for those of us involved in SPIRou since its beginning,” Moutou declared.

As is common in very young stars, the low-mass red dwarf AU Mic is extremely active. Rotating 5x faster than the sun, this active start exhibits giant starspots on its surface, frequent stellar flares, and strong magnetic fields, several orders of magnitude larger than the sun. Detecting the small planet in such a chaotic environment is extremely challenging: its signal is tiny compared to the ~10x larger noise caused by the star’s activity. However, SPIRou’s unique velocimetric and polarimetric capabilities enabled the team to detect the signal. The task also required a detailed analysis of the SPIRou data using complex numerical techniques combined with accurate modelling of the star’s magnetic fields and stellar activity to tease out the planetary signal from the raw data.

“To put in human terms at 22 million years old, AU Mic b is a couple of months old.” said Dr. Baptiste Klein, lead author on the SPIRou AU Mic b paper focusing on the planet's characteristics. “Finding a Neptune-like planet orbiting so close to its star in a planetary system this young puts challenging constraints on our current models of how planets form and migrate,“ Klein said.

Through observations of AU Mic as the planet transited, the team constrained the tilt of the planet’s orbital plane and found it aligned with the equatorial plane of its host star, a result confirmed with ESPRESSO at the European Southern Observatory. AU Mic b’s position close to the star and aligned orbit perfectly illustrate the predictions of current theory; giant planets form far away from the star and migrate closer due to gravitational interactions between the newly formed planet and the surrounding protoplanetary disk. 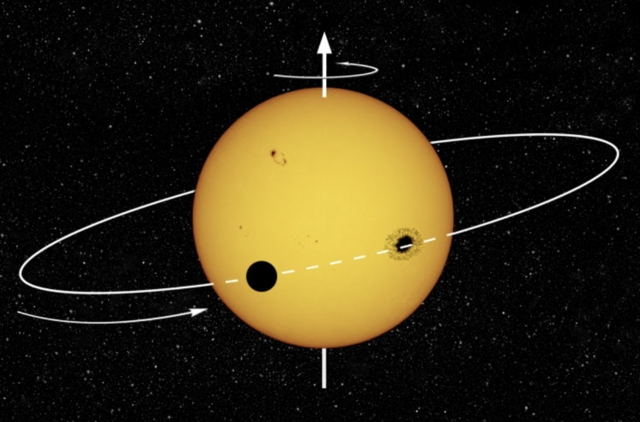 "The SPIRou observations revealed that the orbit of AU Mic b is prograde and aligned with the stellar rotation axis," said Dr. Eder Martioli, lead author on the SPIRou AU Mic b paper focusing on the planet's orbital plane. "These observations are strong evidence that this planet was formed in the protoplanetary disk that evolved into the current debris disk around AU Mic."

SPIRou, a near-infrared spectropolarimeter and high-precision velocimeter, joined CFHT's instrument suite in 2018. Astronomers use SPIRou to detect the periodic wobble induced by planets orbiting their host star. These tiny wobbles in the star's spectra are used to measure the mass of the planet due to its gravitational influence on its star. Simultaneously, SPIRou performs polarimetric analysis of the star's light, enabling the detection and characterization of the host star's magnetic field. The characterization of magnetic activity, like that detected in AU MicB, removes wobbles in the star's velocimetric data that potentially shields planets from detection.

"This discovery is a perfect illustration and demonstration of SPIRou’s unique velocimetric and spectropolarimetric capabilities, making it the best instrument worldwide for hunting planets around young active dwarfs like AU Mic." said Dr. Jean-Francois Donati, co-author on the paper and principal investigator of the international collaboration that designed and built SPIRou. "This first result comes as a great reward for the whole SPIRou team and partners who invested so much efforts and resources over the last decade to deliver an innovative state-of-the-art instrument for the CFHT community."