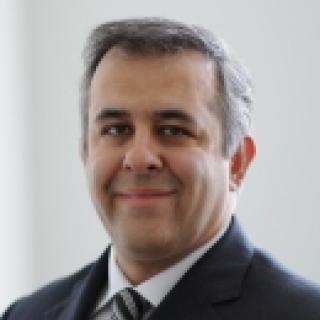 Dr. Hakami obtained his Ph.D. in Biochemistry in the laboratory of the Nobel Laureate Professor Har Gobind Khorana at the Massachusetts Institute of Technology (MIT), and was subsequently awarded a NRSA fellowship from NIH to complete postdoctoral training at Harvard Medical School (HMS). He is currently an Associate Professor of Microbiology and Infectious Diseases at GMU. The main focus of research in Dr. Hakami’s laboratory is to understand the fundamental mechanisms by which vesicular trafficking within the host regulates innate immune responses during infection with pathogenic agents. In particular, a major focus is the molecular mechanisms by which exosomes, a subtype of extracellular vesicles (EVs), regulate innate immunity. The broad goal of these studies is identifying new strategies for development of highly effective host-based countermeasures.

Hakami Lab in the News

Mason scientists take aim for a breakthrough in anthrax treatment

Mason Researchers Looking for Fresh Answers in a Medieval Disease

Intercellular Vesicle Transport (Exosome Exchange) and Regulation of the Innate Immune Response: Recent work in the exosome field has demonstrated the critical importance of their communicative functions for a variety of human diseases, including several infectious diseases. A main focus of our lab is to understand the role of host exosomes during infection with Yersinia pestis (Yp), the agent of plague, and the Rift Valley fever virus (RVFV) [e.g., 1-4]. Both agents are classified as highest priority (Category A) pathogens, and there are no approved human vaccines or highly effective therapeutics currently available. Our lab has developed and optimized methods for purification of host exosomes released from either Yp-infected or RVFV-infected cells (EXi), and characterized the preparations using exosome-specific markers along with confocal and electron microscopy studies. We have demonstrated that EXi released from RVFV-infected cells carry viral genome and proteins and can destroy immune cell types that are known to act as reservoirs for RVFV replication [2]. We have also demonstrated that non-immune cell types that are pre-treated with purified EXi have a drastically reduced capacity for virus production, suggesting that the EXi released during RVFV infection serve a dual protective role for the host. We are currently investigating the molecular mechanisms underpinning these effects. Our lab has also developed a mechanistic model of how the EXi released during Yp infection regulate the innate immune response. We have shown that these EXi carry cargo that is distinct from exosomes purified from uninfected cells (EXu) [1], including four specific Yp proteins. In addition, we have demonstrated that treating naïve human monocytes with EXi (but not EXu) induces effects that are identical to when the cells are infected with Yp. These include induction of monocyte differentiation to macrophages, the induction of naïve monocytes to release a specific set of inflammatory cytokines, and imparting dramatic improvement in the ability of the treated cells to clear out internalized Yp bacteria in an IL-6-dependent manner. These results have led to a model of EXi function during Yp infection in which released EXi induce distant naïve monocytes to release cytokines that in turn induce differentiation to macrophages, thus leading to improved ability for Yp clearance when the bacteria reach these cells. We are currently investigating further the molecular mechanisms of these effects and transitioning to in vivo studies of the EXi effects.

Intracellular Vesicle Transport and Regulation of the Innate Immune Response: Our lab has used a novel reverse phase protein microarray (RPMA) platform to quantitatively survey intracellular protein pathway modulation across the cell in response to infection with Yp, followed by ongoing functional studies of select pathways that emerged from the analysis. These studies demonstrated the importance of a number of host cell pathways during Yp infection that had not been previously known to contribute (12 new protein hits), and also led to the first demonstration that host response to Yp involves a coordinated down-regulation of autophagy [5]. This inhibition involves modulating the activities of multiple proteins, including AKT, AMPK, and p53. Complementing the RPMA approach, we have also performed quantitative mass spectrometry analysis of highly purified CD14+ primary human monocytes to measure host phosphorylation changes during infection. This work confirmed the importance of several pathways identified through RPMA, including the AKT pathway, and also highlighted a potential role for a number of specific AKT interacting proteins. We are currently assessing the respective contributions of the different pathways that we have identified to the inhibition of autophagy during Yp infection, and are transitioning to in vivo analysis of the role of autophagy as part of the host response to infection.

Additional Host Response Studies: Our lab also has focused host response projects that complement our main areas of research. As an example, we have profiled host factors that play significant roles during infection with RVFV, including the demonstration that several specific heat shock proteins such as HSP90 are critical for viral production [6]. Specifically, we have shown that host HSP90 stabilizes the RNA-dependent RNA polymerase of RVFV to allow viral transcription and replication. As several HSP90 inhibitors are already in Phase II or III clinical trials for cancer treatment, these findings suggest the exciting possibility of repurposing them to treat RVF.