Chemistry students present their research to the wider Mason community

In November, graduate students in the Department of Chemistry and Biochemistry showcased their research ranging from issues of sustainability to COVID-19 detection. This is the first graduate poster session event of its kind for the department and provided an opportunity for the Mason community to witness the ingenuity and astuteness of Mason Science students.

“We wanted to give our students an avenue for them to share their excitement and knowledge base and get those speaking engagement experiences at the same time,” said Chemistry and Biochemistry Chair, Gerald Weatherspoon. “It contributes to their professional development and their confidence at the same time.”

Weatherspoon said students and faculty conduct research across Mason’s three campuses and the poster session provides an occasion for them to see what others are working on and consider potential collaborations. Plans are in place to host another graduate poster session this spring.

See what some of the chemistry and biochemistry students are working on:

“We want to use these fibers as wires,” Atari said. “By changing the structure of the fiber, we hope to create a more advanced type of wire that’s also biocompatible.”

Ultimately, the study’s findings provide a foundation for the application of peptide amphiphile wires to circuitry that could result in new medicines and energy technologies. These wires may also help lead to furthering miniaturized circuit parts, electronic materials, and light and magnetic stimulated sensors. 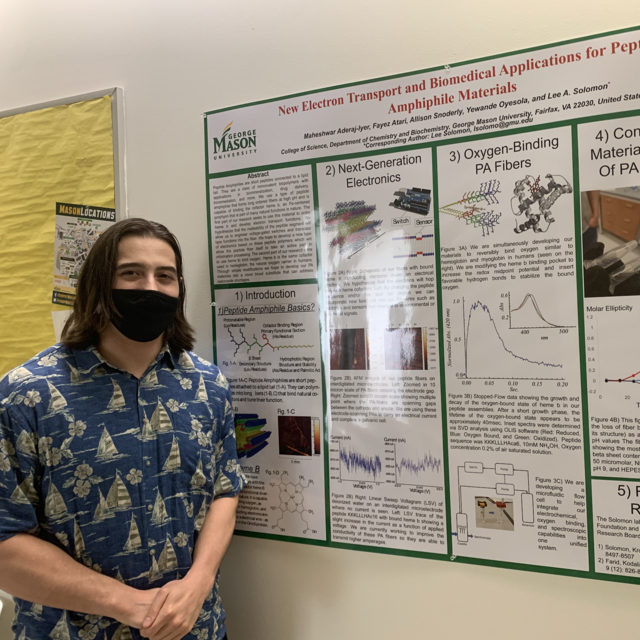 PhD student Andrew Evangelista worked with Assistant Professor Hao Jing to study the use of nanoparticles, a material about one hundredth the size of a human hair. More specifically, their study looked at upconversion nanoparticles that contain rare-earth elements that can convert invisible near-infrared (NIR) light to visible light.

Using successive epitaxial layer-by-layer formation (SELF), they were able improve the level of luminescence in upconversion nanoparticles, which anti-counterfeiters can use to create markings on materials that only become visible under a NIR light. This way the markings shown by NIR light and UV light could be different, allowing the anti-counterfeiters to add additional security.

“When you go to an airport and scan your passport, you can see all the little watermarks,” Evangelista explained. “They put your passport under ultraviolet light. So, we developed this method to use infrared light for a similar process, yet it is significantly less harmful and provides secondary encoding method.”

Their work can be applied to several processes including photocatalysis, hydrogen creation, and environmental purification—providing a safer approach by removing the need for ultraviolet light that can be harmful in varied concentrations. 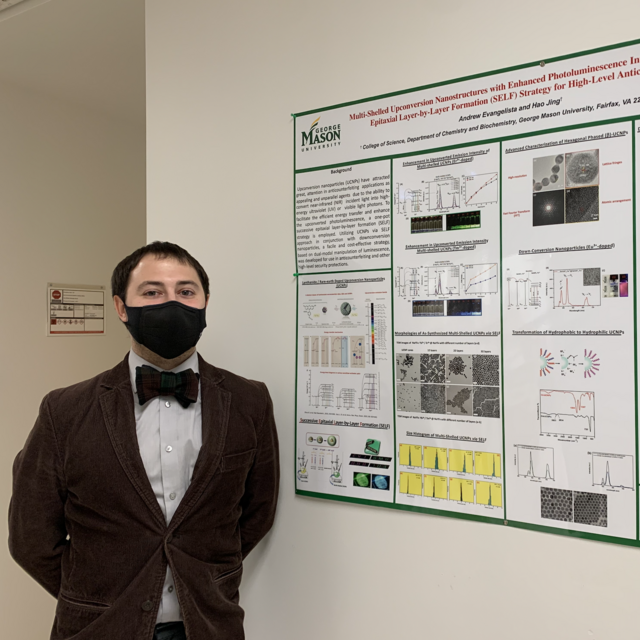 PhD student Kathryn Holguin presented her findings on Na-DCA—an organic material she’s worked with closely over the past year to create a new sodium-ion battery that, she says, is both high-energy and sustainable.

According to Holguin, Na-DCA is a unique organic anode material that has shown excellent performance and kinetics by itself and even more impressive performance when paired with N-doped reduced graphene oxide, ultimately allowing it to be used in a full cell. Meaning it has the potential to replace the often-used, yet hazardous and expensive, lithium-ion battery, which uses toxic cobalt and scarcely available lithium metal. The sodium-ion batteries we create in our lab, are not only less expensive (sodium metal is 1,000 times more abundant in the earth’s core than lithium), Holguin said, but they are engineered to be environmentally friendly and can be easily disposed of.

Not only that, but she found in her study that Na-DCA has a quick and easy synthesis method, meaning the material could be scaled up beyond small batteries and have a myriad of applications in the future such as powering cars.

“When looking at the performance of batteries we want to look at the capacity or energy,” Holguin said. Her findings indicate that her sodium-ion batteries not only have a high capacity but retain that capacity as it is charged and discharged over several hundred cycles.

This research caught the attention of Argonne National Laborites, a U.S. Department of Energy multidisciplinary science and engineering research center, who partnered with Mason’s chemists to assist in additional experimentation to test the capabilities of this alternative battery solution. 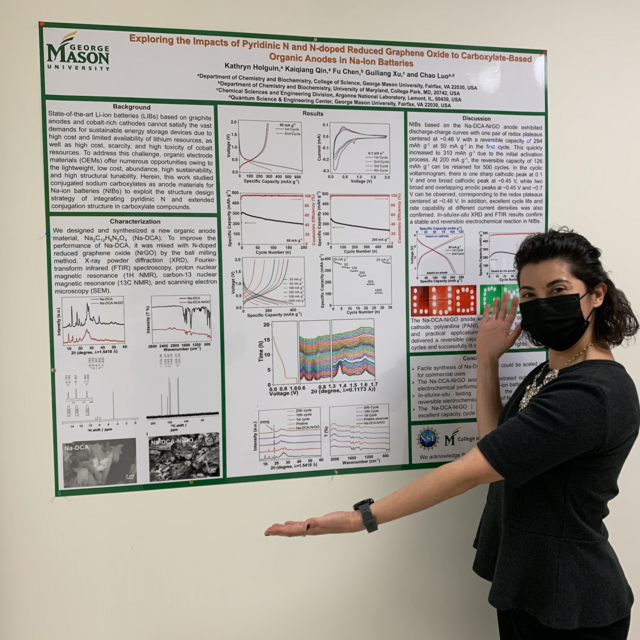 PhD student Mariia Ivanchenko and a team of researchers from Mason, University of Texas at San Antonio and NIST conducted a study where they joined two plasmonic materials into one, forming Hetero-Nanostructures. They combined gold, a noble meta,l with nonstoichiometric copper selenide to investigate their plasmonic coupling in one heterostructure and how it affects their optical and photocatalytic properties.

This is a fundamental study to investigate the plasmonic coupling effect in eccentric core-shell nanostructures, which provides background for the future practical design of dual- or even multi-plasmonic nanosystems with optimized properties for desired applications, such as photocatalysis and photothermal cancer therapy. 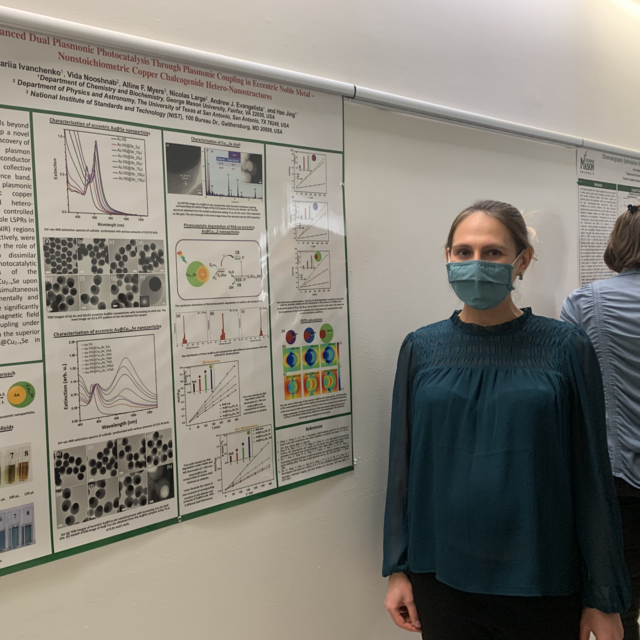 Williams said the study aimed to optimized this collection and testing method. The study utilized Ceres Nanoscience Nanotraps to concentrate the viral RNA prior to RNA extraction and PCR analysis.

“COVID is important to monitor and this method is quite suitable for testing the masses and tracking the virus’ spread,” Williams said. “Ultimately, this method alleviates the reliance on individuals to come in for testing.”

While the study focused solely on Mason’s campus, Williams added that this method is also easily scaled and could be used to monitor COVID-19 outbreaks in large municipalities. 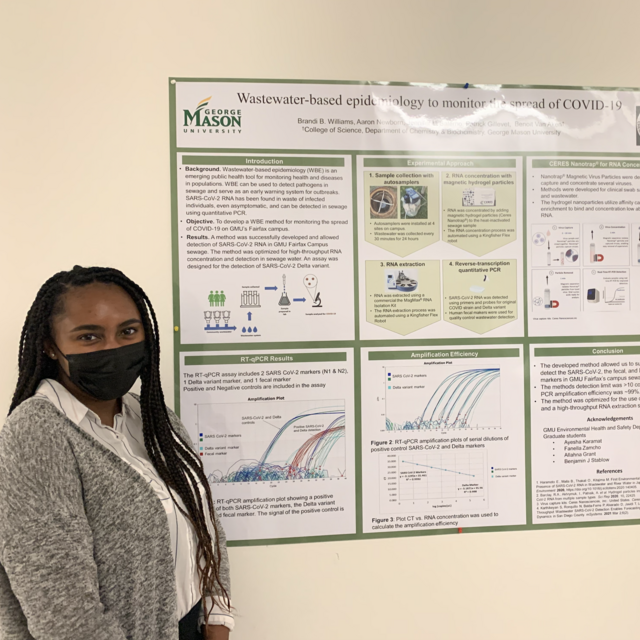 Polychlorinated biphenyls (PCBs) are a manufactured chemical once widely used for a number of products including electric appliances, insulators, carbonless paper, and heat transfer fluids. Found to cause cancer and a hazard to the environment, the use of this material was banned in the U.S. in the late seventies. However, traces of this material can still be found worldwide in the soil and air.

PhD student Fanella Zamcho worked with Aaron Newborn and Associate Professor Benoit Van Aken to study the effect of polychlorinated biphenyls (PCBs) on plants. Her research used a small flowering plant called Arabidopsis thaliana and observed that its exposure to PCBs caused an enrichment of genes involved in phenylpropanoid pathway and lignin biosynthesis.  The study found that this plant did, in fact, metabolize PCBs when exposed—supported by the upregulation of the expression of peroxidase and glutathione S-transferase genes. This work provides important insights into how the increased lignin affects biomass digestibility and its conversion into bioethanol.

“I’m interested in ways we can protect the environment, how to rehabilitate areas affected by PCBs so we can have more resistant plants,” said Zamcho. 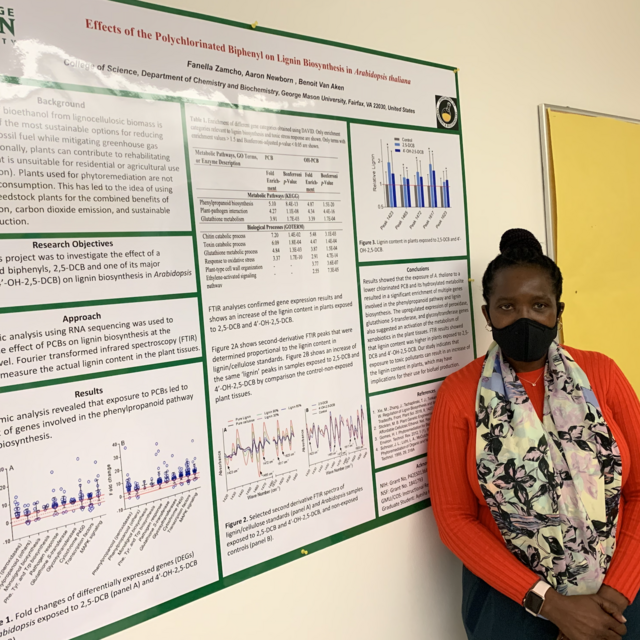