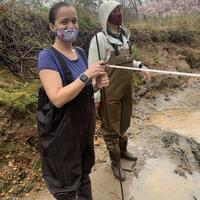 The long term, sustainable goal of this two-year project is to reduce single-use plastic water bottle use behavior of students at two high schools in Prince William County, VA through increased awareness of and connectivity between bottle usage and inland and marine debris problems in the tidal freshwater Potomac River. 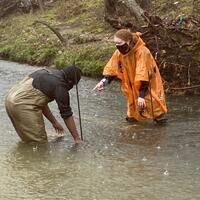 Check out the videos in the GMU - Prince William County Marine Debris Project playlist that was created for teacher and student training.

In February 2021, a survey of two high schools in Woodbridge, Virginia, showed that an overwhelming number of students used three or more plastic beverage bottles a day, most of which were water bottles. When 12th graders Stephanie and Ashley saw those numbers, they were shocked; they realized that even if every student used just one water bottle a day at Freedom High School, more than 10,000 water bottles would be used in a single week.

Working with George Mason University and local county partners, Stephanie and Ashley participated in trainings to learn more about the impacts of plastics on aquatic ecosystems. They learned that plastic bottles do not completely decompose, but rather break down and leave behind harmful microplastics. They also realized that water bottle litter on their campus could drain directly into a local creek that ultimately flows into the Potomac River.

Stephanie and Ashley set out to encourage their peers to use more reusable bottles instead of plastic ones. The student body identified several barriers to why students did not use reusable water bottles and set-out to devise a strategy to address them. For example, they successfully petitioned their school to install water bottle stations for students who did not like the taste of water from the faucet. They also collected more than 300 student action pledges, partnering with local organizations to provide one donated reusable bottle to each student who pledged. To address a lack of understanding about the importance of reducing plastic waste among the student body, Stephanie and Ashley started a social media campaign to reach their peers. Stephanie also shared her voice as a student representative on the Prince William County Schools Superintendent’s Advisory Council on Sustainability.

Stephanie and Ashley not only raised awareness about the impacts of plastic pollution in their school, but they also addressed the barriers their peers had to using reusable bottles. Their environmental stewardship helped fellow students contribute to protecting inland and marine ecosystems.