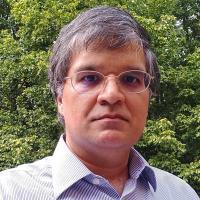 His project is based on the development of a computational method that uses machine learning applied to feature sets derived from molecular simulation to predict the functional consequences of genetic variation.

This technology may be applied to data extracted from the molecular simulation of the proteins that are cancer drug targets and used to predict the susceptibility of a particular genetic variant of the protein to a specific cancer drug.

In addition, the proposed technology may be used to quantitatively classify newly found or unclassified variants as cancer-causing or benign, creating the potential of early and more accurate cancer variant diagnosis.

The broader impact/commercial potential of this I-Corps project is the development of a computational method that will accurately predict whether a particular genetic variant is susceptible to a particular cancer treatment drug. Drug resistance is the main reason a cancer drug treatment regimen fails to cure a patient’s cancer. With drug resistance occurring in 30-85 percent of cancers, it accounts for a major part of the approximately $200 billion spent on cancer care in 2020 in the United States.

This proposed technology may help to improve the diagnosis and treatment of cancer patients by avoiding rounds of failed chemotherapy by tailoring treatment to the genetic profile of the cancer.

Jafri received $50,000 from the National Science Foundation for this project. Funding began in April 2021 and will end in late September 2021.