Mason alumnus helps answer the question why we exist

Why do we exist? And can science help find the answer? That’s what journalist, cognitive neuroscientist and Mason Science alumnus, Bobby Azarian addresses in his new book The Romance of Reality: How the universe organizes itself to create life consciousness, and cosmic complexity, scheduled to release June 28, 2022. 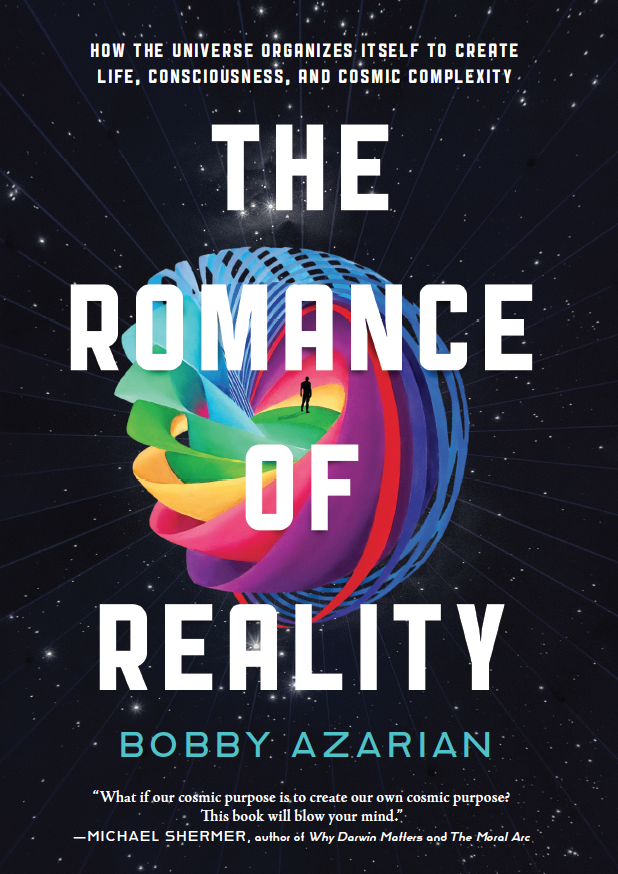 Azarian, who graduated from Mason with a PhD in Neuroscience in 2015, challenges the prevailing paradigm that suggests the universe functions at random and that life came as an accidental byproduct. Instead, he pulls from varying disciplines to look at the phenomenon of life and consciousness from a perspective of information and energy flows. The Romance of Reality explores the possibility that the universe may actually be self-organizing and becoming more complex with life as a fundamental unit to make larger, more complex systems.

“My book integrates ideas from thermodynamics, information theory, cybernetics, evolutionary theory, and epistemology to create an “Integrated Evolution Synthesis” that features an epic cosmic battle between order and disorder, life and entropy, knowledge and ignorance, creativity, and monotony,” he said.

In school, we learn that atoms combine to create molecules; molecules come together to form cells; and cells join to form complex organisms. The Romance of Reality further explains how these complex organisms create societies, that these societies replicate and grow, and how modern technologies may influence the way we continue to evolve consciousness with ever increasing interconnectedness.

“Society’s connection through technology may make way for something that resembles a global brain—but instead of neurons or brain cells transferring information, it’s people,” he said.

The paradigm introduced in this book, Azarian added, supports the notion that the universe’s self-organizing nature establishes a developmental goal that gives life intrinsic purpose—to continue the persistence and spread of life and complexity in the cosmos.

“If life is going to continue to persist, it has to be a collective effort,” Azarian said. “Nations need to align interests, especially when you think about overcoming the sustainability crisis or the threat of nuclear war. We need to begin looking at the larger picture in order to ensure long-term survival.”

Azarian has written for publications including The Atlantic, The New York Times, BBC Future, Scientific American, Slate, The Huffington Post, and Aeon, and his research has been published in peer-reviewed journals such as Human Brain Mapping, Cognition & Emotion, and Acta Psychologica. His blog “Mind in the Machine,” hosted by Psychology Today, has received more than eight million views. Azarian worked on Season 2 of the YouTube Premium psychology-based series Mind Field, which won the show its first Emmy nomination. He is based in Arlington, Virginia.

Visit Amazon to preorder a copy of The Romance of Reality.

To hear Azarian speak in person, keep an eye for this fall’s Mason Science Series schedule. If you’d like to learn more in the meantime, listen to Azarian’s recent appearance on the Joe Rogan Experience.