Two teams of Mason undergraduate students have built digital tools to address some of the tough challenges facing the USA. The teams were participating in The Opportunity Project (TOP), a 12-week product development “sprint” organized by the US Census Bureau in which teams from universities across the country used open federal data to build data-driven solutions to major problems identified by the US federal government such as ocean plastic pollution and transportation emissions.

The nine Mason undergraduates, all majors in the Department of Computational and Data Sciences (CDS), took part in TOP through an independent study section called “Data Science in Practice” that was organized by Dominic White, an assistant professor in the CDS department.

Over the span of 12 weeks, the students had to work with federal agencies such as the State Department and the Environmental Protection Agency, interview national experts to gain an understanding of their chosen problem, and develop ideas with product advisors from industry to make sure they were building something that was needed by end users.

Both teams have been invited to showcase their products at Demo Week, a 3-day online conference (Dec 9-11) organized by the Census Bureau, during which they will be hosting a virtual “booth” on Wednesday December 9 from 2:15-3pm, as well as talking about their experience on a panel about the role of universities in inspiring students to use tech for social good from 3-3:30pm. Registration for the event is free at: https://emamo.com/event/the-opportunity-project-demo-week-2020

Below is more information on the two teams and links to the tools they built.

As the students in both teams were to learn, the TOP problem statements are very broad. Jimmy Carter, a member of the Ocean Plastics team, said, “One challenge that was hard was coming up with a specific product and actually making it in such a short amount of time.” 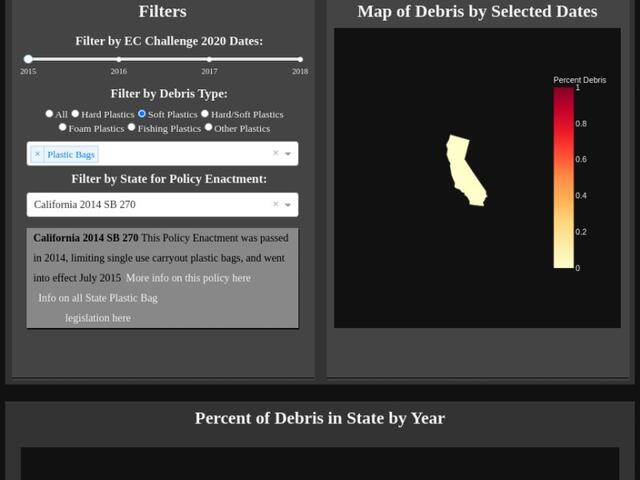 Building a working product within 12 weeks required narrowing the team’s focus to a manageable portion of the larger problem. The team decided to build a dashboard to how legislation around the use of different plastics affects the amount of those plastics that turn up as litter on US coastlines. Their tool, Pollution Policy Watch, is available at http://www.pollutionpolicywatch.com.

Much of the data on plastic debris comes from citizen science datasets created from volunteers at beach cleanups, and ordinary citizens recording the litter they pick up using apps such as Marine Debris Tracker or Litterati. To have an up-to-date, comprehensive dataset of plastic waste, the team also needed to create a data pipeline to combine all these different datasets.

The team plans to update the dashboard with future legislation, as well as new data on pollution – as people like you collect and record it. As Carter says, “Everyone should be aware of the resources and apps that are out there to help collect data. Anyone can download an app and take note of trash they pick up!”

In talking to air quality researchers and user advocates to understand the problem, the team realized just how big a problem poor air quality can be. Globally, seven million individuals die each year from air pollution, and it also contributes to a range of other health issues.

The challenge’s designers asked teams not just to build something that communicated the scope of the problem, but also helped people take action to reduce the transportation emissions and improve air quality.  The Mason team decided to focus on providing air quality comparisons to individuals looking to move homes.

“It is important to be aware of the air quality near the area you reside in because what goes in does have affect our body health wise,” said team member Ayushi Patel.

Moving homes is a change in people’s lives that allows them to make a choice to their transportation habits to reduce emissions. The Mason team’s tool, Air Aware (http://www.airawareapp.com), allows users to compare air quality ratings between counties and overlay different transportation routes such as public transit and bike routes.

The team hopes that the tool will help people make less polluting transportation choices. Brian Cash, who added the transportation options to the dashboard’s map, said, “Air Aware is a nice tool to show case data on air pollution subjects, but there are actions we can take today that don’t need tons of data to understand.” 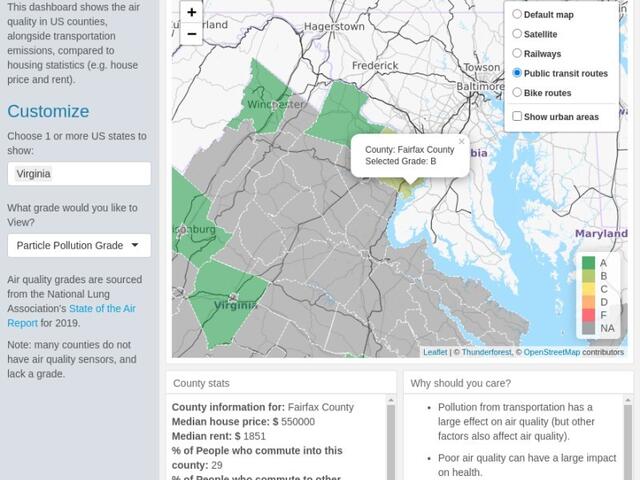